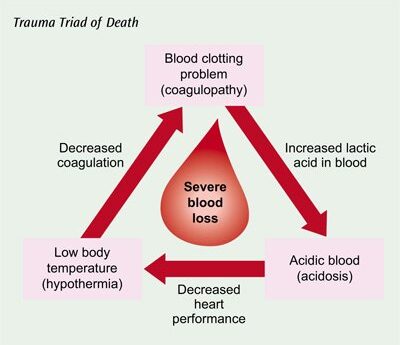 The Trauma Triad of Death

Read more about the Trauma Triad of Death in Dr. Mike Simpson’s eBook: Learn How to Save a Life

When penetrating trauma occurs, tissue is damaged. As the body loses blood, more tissue damage occurs as the cells are deprived of theoxygen that the blood carries. This lack of oxygen is known as hypoxia. Without oxygen, the deprived cells begin to burn sugars (glucose) in it splace in order to survive, this is known as anaerobic metabolism.

One of the by products of anaerobic metabolism islactic acid- as more and more lactic acid enters the bloodstream, we see what is medically known as “Acidosis”. Acidosis has a number of bad effects on the body as a whole, but the reason that it is particularly concerning in the trauma patient is because it has a negative effect on the proteins in the blood stream that are responsible for clotting the blood and stopping further hemorrhage. When the blood is unable to clot on its own, this is known as “Coagulopathy”.

Now, as it becomes more and more difficult for the blood to clot, the bleeding continues and more tissue damage occurs, causing acidosis to worsen. As the blood pressure drops, the tissue’s demand for oxygen-rich blood exceeds the supply and the body enters a state of shock, and attempts to compensate by limiting circulation to the extremities and maintaining circulation to the vital organs. The heart and respiratory rate increases, and body temperature begins to drop. The drop in temperature is compounded by multiple factors, including heat loss due to lost blood, heat exchange with the environment, and lost heat due to increased respirations (breathing). This decrease in body temperature is clinically referred to as “Hypothermia”.

The decrease in body temperature continues to have a negative effect on the blood’s ability to clot, and bleeding continues. As more bleeding occurs, acidosis becomes more severe, causing worsening shock and progression of hypothermia. What results from this process is medically known as the trauma triad of trauma (See diagram). All three factors (hypothermia, acidosis, and coagulopathy) continue to contribute to one another, as the patient becomes more acidotic, more hypothermic, and less able to form clots, thereby bleeding even more. Without treatment, the patient will die.

If you want to learn more:

[1] Dr. Mike Simpson, Learn How to Save a Life eBook

[3] The trauma ‘triad of death’, Understanding the body’s response to injury, and the development of trauma centres, The Open University 2014 see image from web