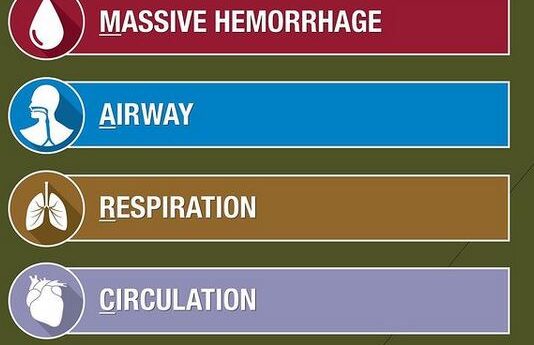 Tactical Combat Casualty Care (TCCC) revolutionized our approach to trauma by utilizing evidence-based medicine in replacing the antiquated “ABCs” with the MARCH mnemonic. If you are not familiar with MARCH, here is what you need to know.

Tactical Combat Casualty Care (TCCC) revolutionized our approach to trauma by utilizing evidence-based medicine in replacing the antiquated ABCs with the MARCH mnemonic.

The old school approach to trauma was: Airway, Breathing, Circulation (ABC). The evidence-based approach that motivated the Committee on Tactical Combat Casualty Care (CoTCCC) to adopt the MARCH mnemonic has drastically changed that approach for the better.

According to the TCCC guidelines, there are three phases of care:

In this blog, we will focus on the second phase—the Tactical Field Care (TFC) phase.

The real work of tactical field care begins with an assessment:

TCCC dictates that massive hemorrhage is the first treatment priority in battlefield trauma for several reasons, as it is:

Massive hemorrhage must be assessed and addressed rapidly and thoroughly before moving on to the next step. Look for signs of massive bleeding. When you see such signs, apply a tourniquet, positioning it high and tight on the injured limb. But remember—training only to place tourniquets is simply not enough. Make sure you train the entire MARCH mnemonic until it becomes second nature.

Once finished, re-examine the casualty and look for missed major bleeding, especially in critical areas such as the neck, armpits, and groin.

Evaluate the patient’s degree of consciousness by talking to them (this will also help evaluate their airway.) Confusion or nonsensical speech can be indicative of either a head injury or severe hemorrhagic shock.

After controlling massive hemorrhage, it is important to evaluate airway patency in the trauma patient. Conscious patients should be allowed to assume a position of comfort that facilitates the passage of air. This is especially true for patients with maxillofacial injuries. Unconscious patients may require an airway intervention.

Two airway interventions that can be performed by non-medical personnel with minimal training are insertion of a nasopharyngeal airway (NPA) or simply placing the patient in the recovery position. The recovery position maintains an open airway while also preventing aspiration from blood, vomitus, etc.

Maintaining an open airway is crucial, especially in mass casualty scenarios where those providing aid may have their attention split amongst multiple patients.

Bear in mind that patients with airway obstructions, or those who do not respond to basic measures, require advanced intervention by a trained medic ASAP!

When it comes to penetrating thoracic trauma, it is vital that you meticulously check the entire torso, from umbilicus to clavicle, including the axillae and any folds of skin.

An open chest wound (sometimes called a “sucking chest wound”) will trap air in the chest, creating a pneumothorax. If too much air builds up, it will create enough pressure to become a tension pneumothorax, which can kill the patient.

Cover open chest wounds with a vented chest seal whenever possible, as they will allow air to escape, but not enter, the chest cavity. If you must use an occlusive chest seal (not recommended or preferred), then you must be vigilant in continued patient assessment, as air from damaged bronchi may continue to build up inside the chest.

For the layperson, this means “burping” the dressing to release air. For providers, this means needle decompression, finger thoracotomy, or tube thoracostomy.

Double-check your Care Under Fire (CUF) interventions, wherein your primary concern was stopping any life-threatening external hemorrhage, and make sure they’re still holding.

At this stage, if you suspect a broken pelvis, then it should be stabilized with a splint.

Do a head-to-toe blood sweep with clean hands/gloves. Performing a blood sweep with hands that are already bloody will only mislead you. If your clean-handed sweep yields blood on your fingers or palms, then you must pinpoint the wound site, expose and evaluate it, and take appropriate actions.

Make sure you prepare all necessary equipment, including additional occlusive dressings, bandages, litters, and hypothermia blankets.

Despite remarkable advancements in trauma care over the past three decades, trauma remains among the leading causes of death for any age group. But why is that? It seems that treating the injuries you can see is the easy part. Placing a tourniquet on a bleeding limb—easy. Placing a vented chest seal on a thoracic GSW—easy. Bleeders, fractures, contusions—all easy. What some find challenging is treating what they cannot see. In penetrating trauma, what you cannot see occurring is the lethal triad of hypothermia, acidosis, and coagulopathy. The trauma triad of death is recognized as a significant cause of death in patients with traumatic injuries. Thus, failing to stop any one of the triad’s complicating factors leads to worsening hemorrhage and eventual death.

Why is hypothermia often ignored? We’ve heard all of the excuses:

– “It isn’t necessary unless you are in a cold environment.”

– “We don’t need to treat at the point of injury because they are about to ride in a warm ambulance.”

If a patient has lost blood, they have lost body heat and are already in a deficit. You must interrupt the lethal triad using all of the means at your disposal.

So, what should you do? First, minimize your patient’s contact with the elements. Get them out of wet clothes and dress them in something dry. Put them on the litter and wrap them in a hypothermia blanket (if you don’t have a hypothermia blanket, improvise with whatever you can get your hands on).

As stated in Mike Shertz’s MARCH Versions (2018): “The MARCH mnemonic is a superior model for evaluation of trauma patients compared to the traditional A, B, C model. The Airway, Breathing, Circulation model fails in root cause analysis: the ultimate goal of having an open airway is to oxygenate blood, which is best done while still in the body. Stopping massive bleeding must be the first priority because failure to do so would render the remaining priorities pointless if the casualty dies of massive hemorrhage.”[8]

Make sure you train the entire MARCH mnemonic until it becomes second nature.

Carry everything you require in the form of an IFAK packed to TCCC/TECC standards. And save a life.